Are the descending Paraclete and the uprising Pan two opposing forces locked in an everlasting struggle,
or are they an alternating current playing between the two poles of spirit and matter?
— Dion Fortune, The Goat-foot God 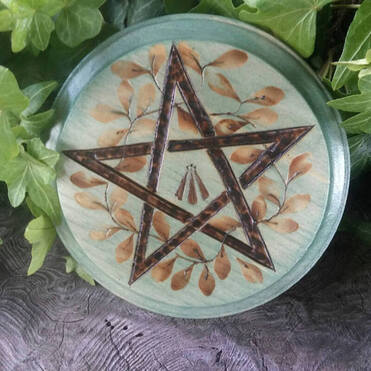 "Druidcraft" is a synthesis of neo-Druidry and Wicca which has, in practice, been around for more than half a century, and is based on the premise that the white witches and cunning folk of Britain and mainland Europe were the natural successors of the Druids and sorcerers in the provision of magical services to ordinary people during the Christian era. Emphasis is placed on utilising shamanic techniques and traditional country folk magic, as well as celebration of the familiar rituals to mark the eight festivals of the Druidic and Wiccan year.
Avalonian Druidic Witches are committed to the traditional Wiccan ethical precept known as the Wiccan Rede, "​An it harm none, do what thou wilt". We consciously reclaim for the craft the descriptions "White Magic" and "White Witchcraft", and disavow any connection with individuals or groups leaning towards grey or black magic.
​We welcome new enquirers.  Please find us on MeWe!
Avalonian Druidcraft is affiliated to “Trinity Grove​, an Esoteric Druid Order” and is inspired by the Avalonian tradition of spirituality which, building on the ancient Arthurian mythos, was developed by Dion Fortune and other early 20th century “Avalonians”. On this foundation of Avalonian magick, we have added inspiration from the neo-Druidic tradition (specifically from the Druidry of Chief Nuinn (Ross Nichols) and the tradition of Druidcraft outlined by Philip Carr-Gomm in his book of the same name. Our own  lineage comes through the Order of Bards, Ovates and Druids (of which our High Priest is a Druid grade member) as well as an "up line" of initiatic succession from Dion Fortune herself, through the Church of the Grail, which she founded. We also hold various Gnostic lines of succession, most notably a line of sacramental succession ("up line") from the significant 20th century magicians Aleister Crowley and William Bernard Crow. For more about our lineage and initiation read my blog post here.

Agreeing with Dion Fortune that "All gods are one God and all goddesses are one Goddess, and there is One Initiator" we invoke and serve the Supreme Being principally, though by no means exclusively, under the masculine and feminine God-forms of Gwyn and Brigid/Bride. We have been called to venerate Bride in part because of her historic connection with Glastonbury and legendary Avalon and also because she embodies the ideal of Pagan/Christian harmony, for as Dion Fortune also wrote, "Two traditions meet in Avalon, the ancient faith of the Britons and the creed of Christ ". For more on our Brigidine tradition please see the "Flame Keepers of Holy Bride page. Similarly, we have chosen to invoke Gwyn ap Nudd as our principal masculine deity, because of his strong connection with the Avalonian mythos and the fact that he is acknowledged as the King of the Fair Folk, specifically those who dwell beneath Glastonbury Tor, and is therefore an appropriate patron for our Green Ray work.
For more about the Avalonian Tradition (from a Christian perspective) please read the article here.
"The gods are lenses that wise men have made through which to focus the great natural forces."
Dion Fortune, The Winged Bull

On Dion Fortune, from "The Temple of High Witchcraft" by Chriostopher Penczak .....
​"A lesser-known breakaway  from the Golden Dawn, yet one who has had as profound an effect on modern magick and Wicca, is Violet Firth, better known by her magickal name, Dion Fortune, short for "Deo, Non Fortuna," or "God, not chance." Fortune left the Golden Dawn to form the Fraternity of the Inner Light, which eventually was renamed the Society of the Inner Light and is still in existence today. Here again we have an even stronger feminine magician archetype, both through her own persona and those of her characters. Fortune wrote several magickal texts, such as The Mystical Qabalah, but was best known for the deep wisdom teachings that influenced modern magick found in her magickal fiction, such as The Sea Priestess, Demon Lover, and The Goat-Foot God. Many feel that she openly expressed beliefs and theology in these novels and stories that she could not credibly present in more academic work, as she was writing before the repeal of the Witchcraft Act in England. She is famous for a line in the Sea Priestess that is quoted by magicians and witches today: "All gods are one god, and all the goddesses are one goddess, and there is one initiator." Though Fortune was not considered a witch, much of the poetry in her novels has a very witchy feel to it, such as this passage from The Sea Priestess: 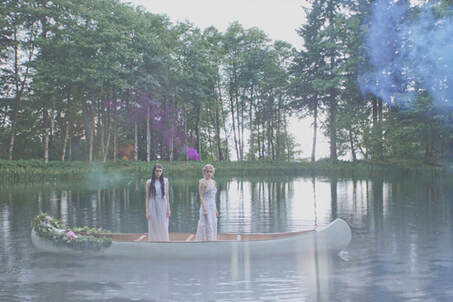 "I am the soundless, boundless, bitter sea;
All things in the end shall come to me.
Mine is the kingdom of Persephone,
The inner earth, where lead the pathways three.
Who drinks the waters of that hidden well
Shall see the things whereof he dare not tell -
Shall tread the shadowy path that leads to me-
Diana of the Ways and Hecate,
Selene of the Moon, Persephone."
​
Dion Fortune and her Sea Priestess character express the archetype of the witch as high priestess, regal and otherworldly, rather than the cunning woman. Fortune's great contribution to the Western Mysteries was the move away from solo reliance on the Qabalah and a quest to find the indigenous wisdom of the British Isles and the greenery of the land and the Goddess. She brought together the pagan and Christian mysteries of the Round Table and the Grail with the mysteries of Plato's Atlantis, forms of spiritualism and high magick. She died in 1946, but many claim that she is guiding the traditions she founded from the inner planes."        ​ 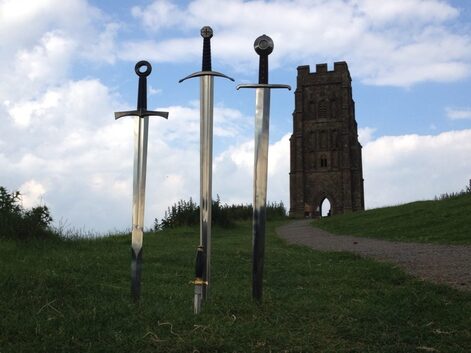 " The tower on Glastonbury Tor, part of 'the holyest erthe in Englande', is part of a church originally dedicated to St Michael. The rest of the church, it is said, was demolished by earthquake. leaving only the standing tower, a pagan symbol, so perhaps the old forces have won here. One does not need to take this too seriously though for the differences between pagan and Christian worship of God are really quite superficial. Basically it is one worship and one God ". 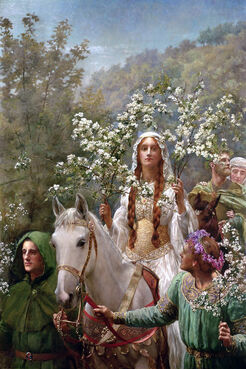 The blueprint for our Avalonian Tradition ... may be found
in the "Arthurian Formula" by Dion Fortune
"The Round Table formula concerns Elemental forces, and the Grail formula concerns Spiritual forces, and these form the Lesser and the Greater Mysteries of the Arthurian Tradition. Look for the basic roots of the tradition in Druidical influences; seek its finest flower in mystical Christianity. And remember that in the background is the secret cult of Queen Venus. ... So you have these three factors: the Druidical, the Witch- cult, and Christian mysticism."
​(N.B. Dion Fortune identifies "Queen Venus" with Queen Guinevere. Photo left "Queen Guinevere's Maying" by John Collier) 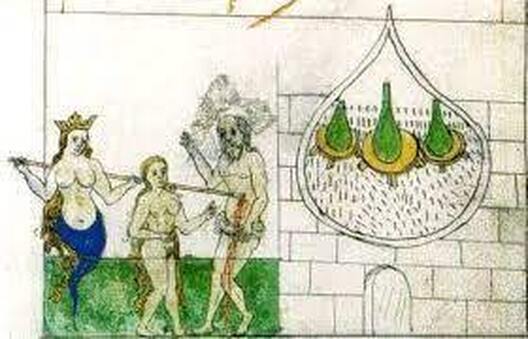 Melusine, Eve and Christ
From of old, and for ever,
​rule we our kingdom, And we are in the depths of your being.
​Awaken and come –
Awaken and come –
Awaken and come.
Come from the depths of your Elemental Being and lighten our darkness –
Come in the name of the White Christ
and the Hosts of the Elements.
Come at our bidding and serve with us
the One Name above all Names –
The Lover of men and of the Elemental Peoples – The Great Name –
Of JEHOSHUA – JESUS.
He who said as he descended into the Underworld: There shall be no night where my people are – And the night shall be as day in the
light of the eternal fire –
And there shall be peace where my people are – The peace of the heights above the winds.
And there shall be purity.
Fire and Air –
Fire and Air –
For Power to serve the Master. 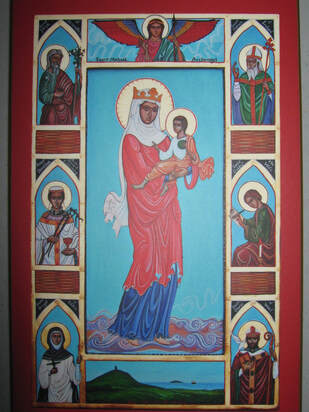 ​"Accolon was walking beside them. He said, “Before the Christ, the Goddess was, and it will not hurt if you think of her as Mary, Uwaine. You should always do service to the Lady, under whatever name. But I would not advise you to speak much about this to Father Eian.”
from "The Mists of Avalon" by Marion Zimmer Bradley
An Invocation written by Dion Fortune for the consecration of her sanctuary at Chalice Orchard in 1932 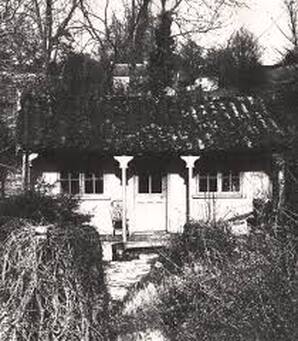 The Sanctuary at Chalice Orchard
"Let us adore the Ancient Ones that we may be known of them and They may bless us in the sowing, in the reaping and in the baking; in the hearths fire, in the rooftree and in the byre, in the bed and at board; in the fighting and in the feasting. For Adonai is the Lord of the Kingdom of Earth. All things earthly are holy unto Him and the Gods of old time are His Voices. Blessed are those mighty Ones who speak with the Voice of Adonai; may we hear them with the inner ear and see them with the inner eye, and be blessed of Them in all we do in the Kingdom of Nature."